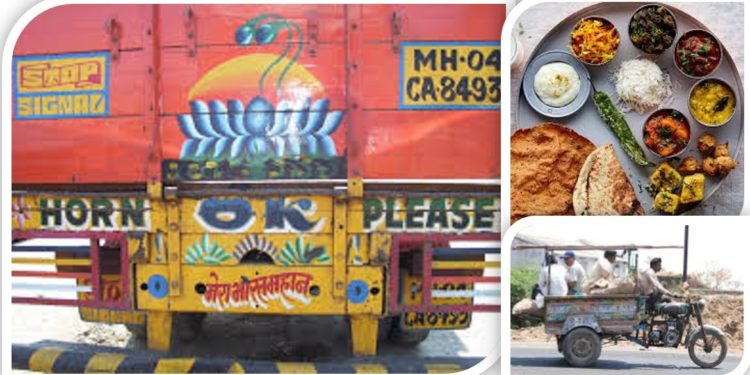 I’ve talked about the huge differences within this immense country in some of my earlier blogs, and I will continue to highlight them in upcoming ones. However, it’s very hard to refer to ‘India’ as a country. Ask ten people who’ve traveled within India and you might get eleven or twelve different answers. This would be mainly based upon the experience in a particular part of the country. If you talk to a German couple after a 2-week trip to Kerala and Goa and compare their answers with another couple from a different European country after a trip to Varanasi, Agra and Delhi, there will be very few similarities. The language and/or the script, cuisine, nature, weather, architecture, people, vegetation and much more are different in each part of the country.

Despite the huge differences, there are many similarities. Some remarkable elements in India could be found all across the Subcontinent. I’ve created my personal list of Top-10 of things that actually make every corner of this country undisputedly ‘India’, even in the tribal or remote areas.

Although there is proof that tea was brought to India decades ago by the Chinese, the official introduction of tea in this country was done by the British. After the introduction, tea became the Indian version of a Red Bull all across the country. Tea is the most popular National beverage for almost all Indian people and is being sold everywhere. If you order a ‘tea’ or ‘chai’, chances are very high that they’ll serve you a strong black tea, filled with milk and lots of sugar. I’m a very big fan of the ‘Masala Chai’ edition, which is a strong black tea with milk, but also with a mixture of cloves, cardamom, cinnamon, black pepper and the strongest contributing powerful taste: ginger. Contrary to a lot of principles in the general cuisine, the quality of your tea will not increase if you’re ordering and drinking it in a more upscale place. I’ve had the best tea in India just on the roadside. These so called ‘Chai Wallah’s’ often sell a cup of tea for less than 10 INR (13 Eurocent) and the quality is very good; they often use fresh herbs for the flavor and the milk is full fat and rich, which – after brewing together – will give one the ultra-chai flavor.

Nobody will criticize me for sharing some of my ever-increasing irritation about the nending noises in India. People are loud and they don’t mind sharing these irritating sounds with everyone around. Don’t be surprised if people around you start spitting. Even worse: it’s not uncommon to notice a lot of human morning rituals during a early morning walk through residential parts of an average Indian city. And there is more: traffic is horrible in almost every part of India, mainly because ‘horning’ almost seems to be a national sport with an ongoing competition; who is the loudest ‘honker of the day’? One of the oddest things that one could observe on the roads in India is the ‘Horn ok’ sign at the back of almost all trucks. While trucks are actually encouraging other people on the roads to use their horn, there are actually a lot of ‘no horning zones’ within cities. India wouldn’t be India, if people would actually follow this public guidance.

India is the largest democracy in the world with a lot of government regulations. As a result, one could find a lot of state-managed messages, encouraging people not to spit in public, follow traffic rules or avoid using excessive much water. It’s very funny to see some of these messages, mainly because of the very direct forms of the (English) language. All across India, one would find signs on walls, fences or government buildings telling people to ‘stick no bills’. Even after being in India for over 28 months now, I still laugh about this; I’ve seen so many concrete walls with ‘stick no bills’ signs, partly covered with the latest announcements about a travelling circus, hair growing elixirs or job offerings.

People from all backgrounds visit public restaurants a lot for their lunch- or diner food-options. Especially on the lower end of the spectrum, one could find unlimited eateries. The menus at these places are often very simple, with a limited set of options. Although tastes may vary, there is actually one thing in India that could be ordered in almost every corner of this country: a thali. The objective of the thali is very simple: serve the customer fresh prepared food with a wide variety of tastes and dishes. In a basic thali are some curries, vegetables, rice, dahl, curd and sweets. They will start serving you the dishes on a metal round plate. Some of the curries will be served in smaller metal bowls. The idea of the thali meal is to serve a variety of curries (vegetarian or with meat/fish) as an accompaniment to the naan breads or chapati’s. A thali, which is a heavy meal, could be bought for less than 60 INR (0.75 Euro) if you’re ordering one in remote area’s or very crowded areas in large cities. There is a wide variety of thalis within each city. One of my favorite thalis is the Gujarati thali, in which the dishes are prepared with a sweeter taste.

With over 1.3 million employees, the Indian railways is one of the largest employers in the world. Offering a network of huge connections between the larger cities and a combination of a lot of local trains, the Indian railways has the largest network of trains within Asia and the second largest in the world. The trains are being managed by a huge organization. They are responsible for trains leaving and arriving on time, clean and safe railway stations and a wide variety of routes, offering seats in a wide variety of classes. Unfortunately, one could experience a lot of delays and it’s not uncommon that trains would usually be delayed by 1-2 hours.

I really love India and try to avoid any judgements within the country. But some things are so tough and obviously funny and therefor it’s hard not to criticize it. Take the bureaucracy as an example. I often share my beliefs with people about India’s bureaucracy as a joke: the British brought bureaucracy to the Indian subcontinent, but the government and the Indian population did an excellent job in improving this. The bureaucracy is interesting in India, and it will actually consume a lot of your time here. While living in India, opening a bank account, registration of a rental lease agreement, extension of a visa…..things are definitely improving, but some of these processes could turnout in a time consuming and frustrating process.

The letters ‘M’ and ‘G’ refer to Mahatma Ghandhi. I always had the impression that he would be a hero for all people, but this is actually not true. Whereas Ghandhi has been seen as a leader and peacemaker in the Western World, in India there are many individuals who are actually opposed to his views and actions. However, the Indian government has actually created this myth about the man. One of the very visible signs is the inauguration of a MG Road in almost every Indian town or city. Some people refer to this street as ‘Main Street’, and I actually don’t know if the controversy about Gandhi is the main driver for this.

In India, people will always come up with solutions, even if it’s not clear if things could be sorted out or fixed. They’ve even come up with a word for it: Jugaad. Go online and use google to search for ‘Jugaad India’ and check on the images. You will find the weirdest solutions for technical issues of day to day challenges. There is a lot of Jugaad in transportation: people use two-wheelers to transport huge things, very often risking their lives. I’ve seen a lot of big mirrors or large glass elements, being transported by two individuals on a two-wheeler.

The rickshaw is a recurring theme in this blog. One could find rickshaws in almost every Asian country, but some of their models in India are so iconic that it’s hard to imagine an Indian city without them. Whereas human pulled rickshaws or cycle rickshaws could only be found in some cities in India, the Auto Rickshaw offers a service to you all across India. Funnily enough the colors of the Auto Rickshaw vary from state to state. I’ve seen green-colored Auto Rickshaws in the south, while yellow and black remain the main colors in my home state (Maharastha).

Although India has been one of the fastest growing economies in the world for years now, it’s still considered a third world country. I’ve written about the socio demographics of the country before, highlighting the huge disparity between various groups within the Indian society. There are very well-developed parts in India, with higher average incomes. But don’t let the stats fool you, because underprivileged people could even be found in Goa, Kerala or other more affluent parts of India. As a result, one could find beggars in almost every corner of the Indian subcontinent.